New Book - How to Maintain and Modify your new MINI

Pelican Parts' new book, How to Maintain and Modify your new MINI. The book contains 240 pages of full color projects detailing everything from performance mods to changing your brake pads. With more than 500+ full-color glossy photos accompanying extensive step-by-step procedures, this book is required reading in any MINI owner's collection. The book is due to be released in late 2012.

Click Here for a sample article AND a drop-down menu for many more articles on weekend maintenance projects.

MINIs Under The Mistletoe - Minis have feelings TOO! (Old and New Ads)

The 1986 Rover Cars 'Mini' Xmas TV advert campaign was created (and probably inspired by then Rover Chairman 'Graham Day') to prove that the famous Mini was still very much in full production and hadn't died after the launch of the Metro.

Here's an updated version of the 1986 ad showing the BMW MINIs have feelings TOO!

"Min" in the Smokies

Springtime in the Smokies - An early morning drive on the southern Foothills Parkway from Townsend TN over to Deals Gap, NC for a run on the "Tail of the Dragon". 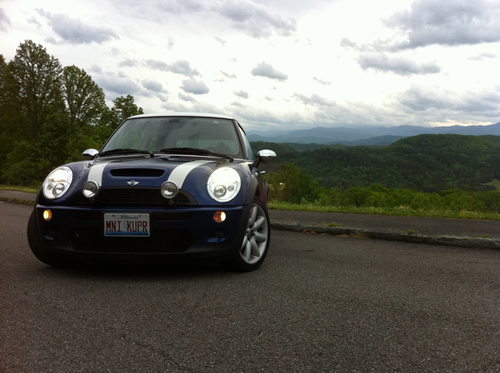 I'm finding that Classic Mini's are really, really hard to define by their Mk I, II, III and later model designations.  Because Mini's were built from 1959-2000 with few major changes to their body shell and sub-frame structure . . . .they've become the "Mr. Potato Head" of automobiles.  By swapping out a few key body parts (including the VIN plate) a late model Mini can be titled as a much earlier model.

When building or creating a "tribute" Mini one of the main things that builders will do is basically strip out all of the modern power assist and environmental components that were added to late model vehicles.

In the case of "Paddy", I know that he was built by Mini Racer Dyrk Bolger , owner of Classic Motor Works, in Winnipeg CA.  I contacted Dyrk and he confirmed that he did built Paddy for a client and that the car was later sold to an owner in California.  Dyrk said that he put in a crate 1275cc Series-A engine in at that time.  In California,Bill Gilcrease of Mincomp Racing rebuilt the existing engine into a high-performance 1380cc unit.

Here's where it gets interesting as a new owner . . .

I have the build sheets (invoices) for the work that was done a Mincomp which are extremely helpful in trying to understand what is stock and what is not both in and on the engine.

Paddy is VIN'd as a 1973 Mini 1000 but presents himself as a 1966 Mini Cooper S because of changes to the bonnet and boot, as well as other visible attributes like the grill, tail lights, and engine bay.  That's what really drew me to this particular vehicle.  It's modern but looks classic.  And I want to keep it that way!

There are currently some things that are not right about the engine bay and over the next year I want to try to correct those issues.  Some of the most obvious things are the aftermarket K&N air filters and non-original fuel lines, hoses, and breather connection. 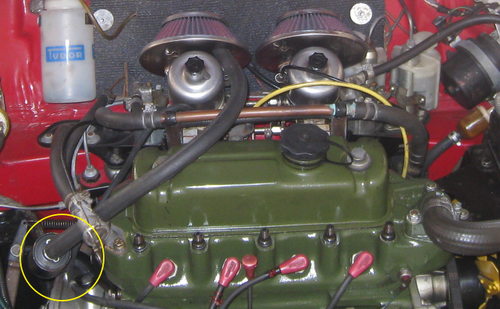 The crankcase breather is circled in yellow above and has a large rubber hose running from it up to the rear of the K&N carburettor filter.  I think this all looks a bit cluttered and will need some "sorting out".    But first I wasnt' to sure what the breather DID (?) and I've see other photos of classic Mini engine bays where there was a K&N filter on the breather tube with no hose running to carburettor.  What was right?

I did a search on the UK Mini Forum and found an interesting discussion on how the system works and why the hose SHOULD be connnected to the carburettor.

Here's a snippet from that discussion:

It doesn't go anywhere, it just doesn't form in the first place. The sludge is the result of water oil and fuel collecting as a mix in the crankcase and getting plastered all over the hot metal. The gas does not flow out on it's own. It collects, and while the air does manage to get out the crud that's in it tends to stay behind. The pressure in the crankcase is higher with the system disconnected, mainly because the inside of the engine consists of many different connected chambers. You get different pressures in different regions. If you don't like the thought of it, it's just because you don't really understand what's going on. All it is really is air with some oil, a tiny bit of fuel and an amount of water vapor. It's very similar to exhaust gas. It enters the carb after the jet and just flows through with the mix already travelling through it to get burned off. The rocker cap has a small vent in it which limits the amount of air which can be drawn through the engine, which increases the depression inside the crankcase and limits the amount of gas travelling through the carb. Whether you like the idea of it or not every single road car engine in the world uses the system and it works well. It is technically a requirement of the regs to prevent the C**p inside your engine being released into the atmosphere.

The MINI - A Celebration Of A Classic British Icon

Tour London in style! smallcarBIGCITY has a fleet of beautifully presented classic Mini Coopers to take you round all of the sights for the ultimate guided tour of London! The Great Escape Tour covers every sight in London - Buckingham Palace, London Eye, Houses of Parliament, Big Ben, St Pauls Cathedral and many more that you have yet to discover. You can even learn about the hottest royal couple in London on our NEW William and Kate Tour! Plus - 100% SATISFACTION GUARANTEED! smallcarBIGCITY

Are you craving more motoring exhilaration? Don't worry - you're becoming a manual. Watch this video to better understand this awkward, but ultimately awesome phase of life, and how MINI can help you enter Manualhood.

Styled after 1950s-era public service announcements that taught students  about puberty, nutrition, and the threat of nuclear war, the new “Becoming a  Manual” video explains why all drivers should opt for cars with a manual  transmission. In addition to pointing out benefits like enhanced fuel economy, a  more exciting driving experience, and a lower base price, the video teaches us  that driving stick is a part of growing up.

“As we approach manualhood, our bodies and minds start to change,” explains  the cheery gym teacher. “Manualhood is when your body is craving more  exhilaration than an automatic can provide.”

If you’re not sure how to get started operating a car with a manual  transmission, Mini has helpfully provided a PDF called “Becoming a Manual.” And for even  more reasons why you should learn to drive a manual, Mini has compiled an infographic of statistics gleaned from an online survey.  Among the findings: people who can’t drive a stick-shift are 25 percent more  likely to play the Facebook game FarmVille.

So what are you waiting for? Watch the video below and get ready to embrace  your manualhood.

Here's a shot of me and Min running the "Tail of the Dragon" nears Deals Gap, NC in 2011.  For the past two years MOTD has become an annual week long trip for me.  This might be too much of a trip for Paddy but maybe someday I'll take him on an excursion through the Smokies and Blue Ridge Parkway?! 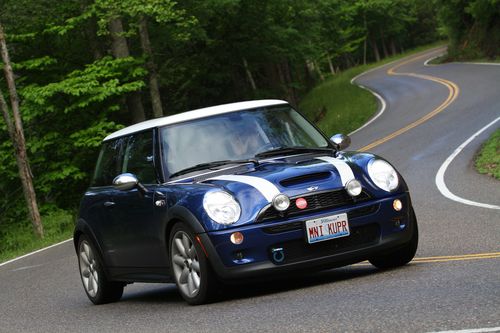