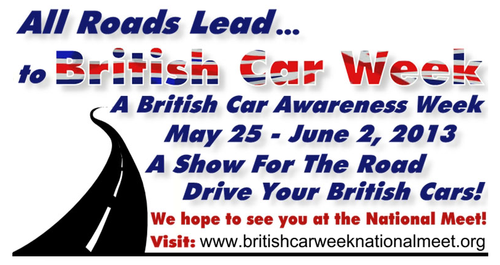 British Car Week was the brainchild of Scott Helms in 1997. Scott wanted to find a way to promote awareness of  the classic British cars hobby and for owners to get their cars out of the garage and drive them. Soctt says it doesn't matter whether your car is in better than new condition, or it's a less than perfect unrestored gem. As long as it can be safely driven down the road, this is a great opportunity to show off your favorite car, and take advantage of what British car motoring is all about.

Why a national meet? The British Car Week National Meet was the brainchild of Barry Harrison back in 2010. Barry knew that there were already millions of opportunities each year to attend some fantastic LBC car shows. Some are small ones put on by local clubs where everyone interested in British cars is welcome and others are large, national marquee specific events. He thought there should be at least one organized effort each year to bring everyone together, no matter the marque. What better time than during British Car Week and what better place than the middle of the country.

Everyone is invited. It makes no difference if you are a member of a club or not. We just want everyone with an interest in British cars and bikes to join us and have some fun. So join us in beautiful Hot Springs Village, Arkansas for British Car Week National Meet 2013! The beauty of the Ouachita Mountains will make a picturesque back drop for BCWNM 2013 and will again bring together collectors, owners, and enthusiasts from around the world to see and exhibit the crown jewels of the British marques! Dance with the Liverpoole Legends. Come and experience the beauty of the "Natural State" while touring through stunning state and national parks. Enjoy noggin' and natter with old friends. Participate in the first ever President's Cup Challenge!

The comments to this entry are closed.