Paddy is being treated to a week at Bob Zook's Auto Body for some minor rust and paint repair to the driver side door.  From the time that I brought Paddy home, there had been a line of paint "bubble" at the very top edge of the door where the stainless window trim meets the painted surface.

I originally thought that it might just be a buildup of paint, but after returning from Mini 54 I notice that the bubbles were cracked and there was some rust underneath.  Yikes!  I didn't want THAT to continue.

One body shop thought it might be from improper paint preparation from a prior re-spray and thought I might be opening a can-o-worms if I tried to paint just the affected area.  I didn't agree and decided to take it to Zook's.

Paddy was welcomed into the "Zook Family" of car restorers and they agreed with me that the issue was not paint prep, but rust starting from where the window meets the trim.  We thought we could just pop off the trim, sand, and paint . . . but as the pictures show, all the hardware needed to come off along with the entire door.

I stopped out to check on the progress and the door is sanded and primed.  Looks like I'll probably get him back nest week in time to tuck him in for the Winter. 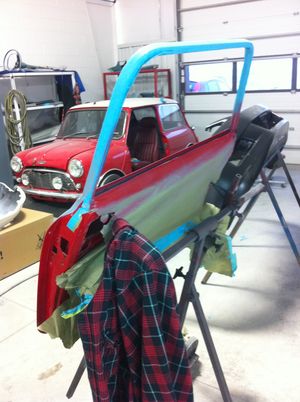 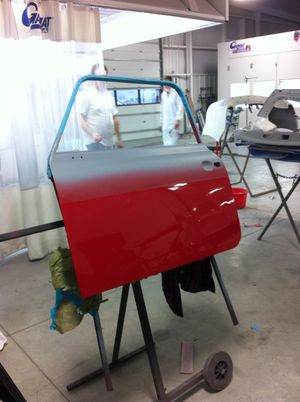